When Scott English, the race director of the English’s Ridge Rumble 50k, proclaimed I’d find myself signed up for another trail adventure sooner rather than later, he should have also purchased a lottery ticket to take advantage of his powers of prognostication. Sure enough, with the Medved Madness 15-mile trail race in my backyard, I couldn’t say no. Despite only managing around 40 miles per week over the four weeks since the 50k, I signed up feeling good about another opportunity to play in the woods and commune with great people.

The race format consisted of three five-mile loops covering all manner of wooded terrain from knee-deep mud to single-track trail to swamp crossings and a dip in Hundred Acre pond. Despite a relatively moderate 1300-feet of elevation gained over the course, the lack of vertical gain was made up for with each foot pulled from a mud bath. Though my sample-size is limited, this was by far the most “traily” trail race I could imagine, and the destruction of my shoes and quads was proof.

The first loop covered by far the greatest vertical gain of the three segments, and though I began with the lead group of four other runners, I quickly made the judicious decision to pull back the pace and watched the eventual top-three fade away. Perhaps learning from my novice mistakes of the 50k, I settled in to a pace I felt confident I could maintain given the terrain. Passing over the infamous Water Tower hill and heading for a quick dip into Hundred Acre pond, I passed through the first five mile loop feeling good and running smoothly.

Loop two did not have quite the same vertical challenge as loop one, but might have had the most technical trails of the race (along with the ever-present calf-sucking mud). It was on this loop that an unfortunate mis-reading of the trail markings (a combination of an unfortunately parked car and my mistake) resulted in running just over a quarter mile off-course before realizing my error and retracing my steps back onto the course. With no one in sight ahead or behind, this blunder would come back to be the likely difference in my finish position. Despite my anger and frustration, I attempted to remain calm and slowly picked up the pace through the rest of loop two. Though the time doesn’t reflect it due to the mistake, my own data-tracking revealed this to be my fastest 5-mile segment.

Loop three, though the flattest by far, also encompassed the most mud, swamp, and bushwacking of the three. By this point, choosing the firmest or driest line on the course had gone out the window and I was simply plowing through all obstacles with a bit of reckless abandon. By the midway point of the loop, I was catching glimpses of another runner in the distance and put in my swiftest miles since the first two to try to make a bid for an exciting finish. Despite my best efforts, my legs felt simply drained from the unrelenting mud an inability to ever find a smooth rhythm on the course. Normally, hill climbs are an area of strength for me, but as I made contact with eventual 5th-place finisher, Landry LaMotte, on the final steep ascent, he quickly discarded me and I would settle for a 6th-place finish in a time of 1:51:34. 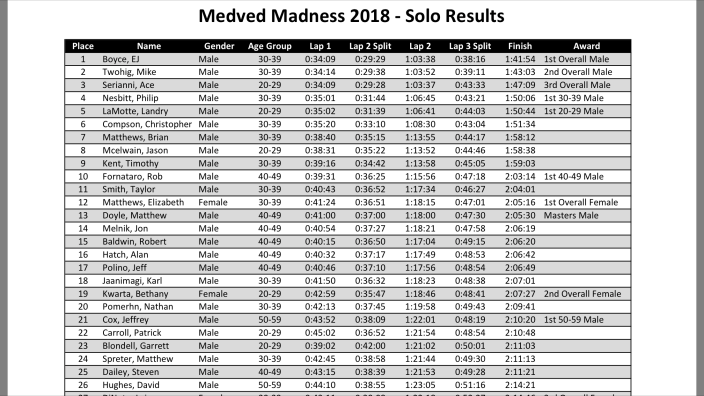 Finishing 9:40 back from overall winner EJ Boyce, this race was a grind from the starter’s gun. The lack of volume over the previous month during “recovery” from the Ridge’s Rumble 50k certainly played a factor, but I was happy with myself for accepting this early on and running a smart race (not always my strong suit – see my 50k race recap for evidence), finishing with a consistent pace throughout and about as much of a “kick” as the old horse can still muster. According to Strava, my final data report was 15.7 miles (thanks to my extra “detour”) in 1:51:34 (7:06/mile) and 1,310 feet of elevation gained.

Like the mud that was caked to every inch of my lower body, this race cemented my new-found love of the trail running/racing experience. With Medved running the show, the entire event (including post-race chicken barbecue picnic) was first class and exceptional. I will definitely be back for the sister race, the Midsummer Night’s Madness trail half-marathon, and likely many more wooded adventures to come.

Quinn also finished the kids’-K race and replenished her energy stores the only proper way… with a freeze pop!

One comment on “Mud? What mud? Medved Madness recap”

Are you ready? NOPE!